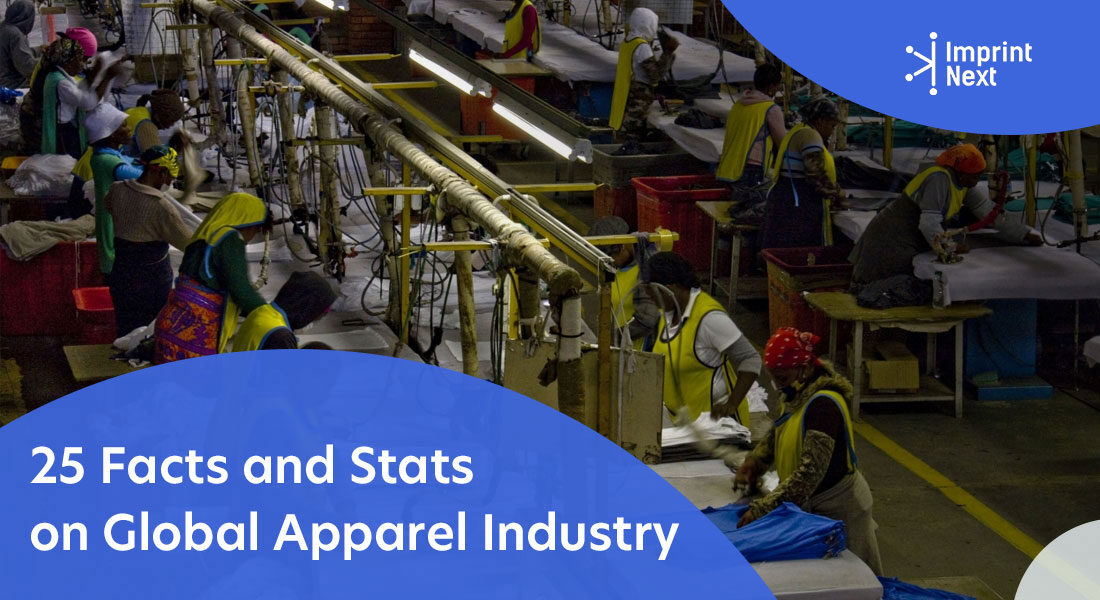 01) The global garment industry, including footwear, clothing, and luxury fashion items, is worth nearly $3000 billion.

03) The retail value of the luxury apparel market is nearly $340 billion, whereas bridalwear shares a $57 billion market value.

04) The market share of apparel made from organically grown cotton was worth more than $5 billion.

05) Of all the apparel sold in the United States, nearly 40% is imported from China.

06) Americans spend around $2000 on apparel and related products every year.

07) People of Manhattan spend the most on clothing items at $400 per person per month.

08) People of Tucson, Arizona, spend the least on clothing items, only at $130 per month.

11) China is the largest producer and global apparel market of cotton shirts worldwide, due to which its output is nearly 60 million garments each year.

SEE ALSO:  How to Screen Printing on Long Sleeves and Pants?

13) Furthermore, China’s share of textile production is nearly 54% of the world’s production

14) Textile manufacturing industry in the United States has declined by 80% over the past two decades.

15) Italy, Germany, and the UK are Europe’s largest fashion markets, while the average spending is about $782 per year per capita.

16) UK fashion industry accounts for nearly £26 billion, consequently making it one of the world’s biggest.

18) Indian textile industry is the second largest after China and shares 23% of the world’s spindle capacity.

20) Vietnam is the 5th largest textile exporter in the world, and in addition to total exports of $29 in 2015

21) 75% of the world’s fashion market is in Europe, the USA, China, and Japan, whereas the global fashion apparel industry. So it accounts for nearly 2% of World GDP.

22) The United States is also the largest importer of garments in the world.

23) In the UK, consumers have as much as $47 billion worth of unworn clothes in closets.

24) The textile industry is also one of the most water-wasting industry in China. So it has over 2.5 billion of water being wasted every year.

25) Portugal’s leather shoe exports have increased to 300 percent in the last 20 years.

SEE ALSO:  30 Inspirational Quotes that Will Motivate You to Succeed
Spread the love